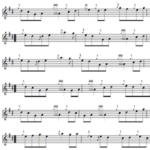 We have just added 34 more tunes to our Bagpipe Tune Library. These tunes are all written by pipers I know and all excellent compositions.  “With a little help from my friends: they are:

There are a total of 3600 tunes, including 288 piobaireachds on our website. All are played by myself on the full bagpipe. When you download them you receive a recording of me playing the tune plus the written music n BMW and PDF format.

We hope you enjoy the music!

All prices in Canadian Dollars