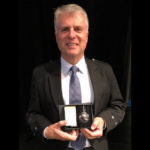 As a young piper growing up in Vancouver Jack had heard many times that the Northern Meetings in Inverness was the most prestigious piping contest in the world. He finally had a chance to compete there in 1978. In 1978 the competitors were not yet split into “A” and “B” – they all competed together. There were 79 in the March that year and 81 in the Strathspey and Reel. Jack won first prize in both events. 1978 was the 2nd year of the Silver Medal competition. It was stated ahead of time that the top 3 finishers in the Silver Medal would be moved up to the Gold Medal the following year. Jack finished 3rd in the Silver Medal playing “The Earl of Seaforth’s Salute”. Jack has competed at the Northern Meetings nearly every year since 1978. The committee very kindly honoured Jack with a special presentation in 2018 in recognition of his 40 years of competing and support.