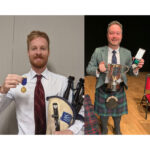 Congratulations to Nick Hudson and Alex Gandy on winning Two of Piping’s greatest prizes at the 2022 Northern Meetings in Inverness, Scotland.  Nick won the Gold Medal and becomes only the 3rd US-born piper to achieve this tremendous prize.  Alex Gandy won the Former Winner’s March Strathspey and Reel for the 2nd time.  Alex becomes only the 3rd piper from outside of Scotland to win this.  Both Nick and Alex were playing Lee & Sons Pipe Bags and both have earned invitations to compete in the Glenfiddich Championships in October.

All prices in Canadian Dollars